The Infamous “While I’m Still Warm…” Money Clip to Be Auctioned…Along With Lots More Marilyn Monroe Memorabilia From the Estate of Allan “Whitey” Snyder!

Allan “Whitey” Snyder was Marilyn’s longtime makeup artist…he did her post-mortem makeup, but before her death, Marilyn asked “Whitey” to promise her that he’d do her makeup if she died before him. He joked, “Sure, bring the body back while it is still warm and I’ll do it.” Marilyn appreciated the joke so much, she gifted him with a gold Tiffany money clip.

Sadly, by early-August of 1962, it was a joking pact that “Whitey” made good on…though he carried out his promise to do Marilyn’s post-mortem makeup, he needed a flask of whiskey to get him through the emotionally traumatic  job. 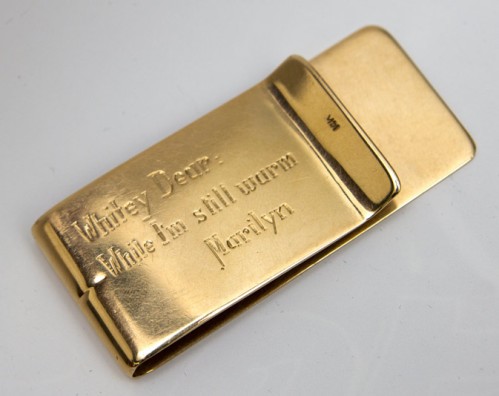 Along with the money clip, there are many photos and letters from Snyder’s estate going under the hammer.

Article About the Auction HERE

Above photo: Snyder applies make up to Marilyn Monroe.