The Return of The Three Stooges

I have to admit, for as long as I’ve heard about the rumblings of a Three Stooges film being in the works, I’ve been skeptical. Making an entertaining film is difficult, but making an entertaining film that imitates one of the greatest comedy teams ever…well, I was concerned that all sorts of bad was going to happen. I’m not a fan of remakes and even biopics are hit or miss…mostly MISS. So, finding three guys to imitate such iconic characters and be able to pull it off convincingly, let alone well, the concept was about as far-fetched as any original Stooges script ever was!

That said, the first saving grace was the safety net known as the Farrelly Brothers. Lifelong Stooge fans themselves, I knew they’d give them the respect they deserved. Phew! But, the casting was another concern…a BIG one!

However, it appears they’ve pulled off the unimaginable task and one that I never thought I’d admit to..

…Yep, Sean, Will and Chris ARE The Three Stooges!

I’m yet to read a bad review for the film, and the various trailers that I’ve seen have been hilariously funny. Of course, I’m still waiting for the film to open here in Australia and I’ll be in line to buy my ticket when it does. My hubby and six year old son will be there too.

The Three Stooges were always good-natured fun. A stress relief, a kooky laugh, a bit of silliness to ease the harsh realities of life. Okay, okay, the odd poke in the eye and the pulling of perfectly good teeth got a few parents upset, but these days, as a parent myself, there’s a whole lot more in the world to be upset over, and a whole lot more violence for kids to see than some cleverly staged, hilariously funny Three Stooges schtick!

In any case, this is a film that I’m really, REALLY looking forward to seeing.

Congratulations to all involved, firstly to the Farrelly Brothers for respecting the legacy of The Stooges and bringing them back for modern-day audiences to enjoy, but especially to Sean, Will and Chris, for resurrecting Larry, Curly and Moe in such an authentic, masterful, zany way.

You know, somewhere, Larry, Moe and Curly are laughing their asses off and giving you guys a well-deserved round of applause…and maybe a poke, a slap and a head boink…or two 😉

See the trailer below. 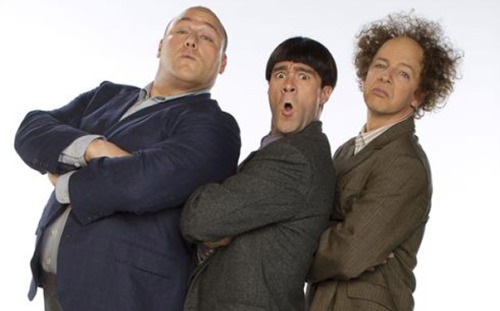 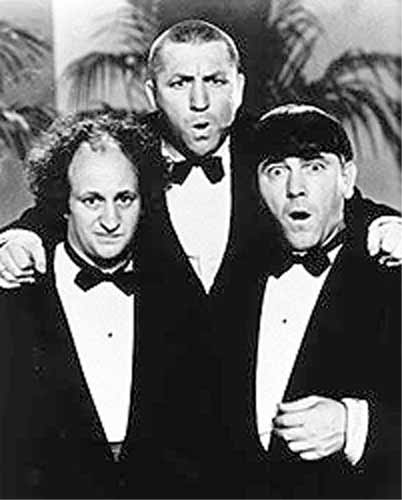 19 responses to “The Return of The Three Stooges”